On The Spot (OTS) News Southport
Home News Blocked but now you want my vote?

Thank you for the invitation to vote for you and your Tory colleagues.

I must say however, that for pressing reasons (as below) I may sadly have to decline your offer. 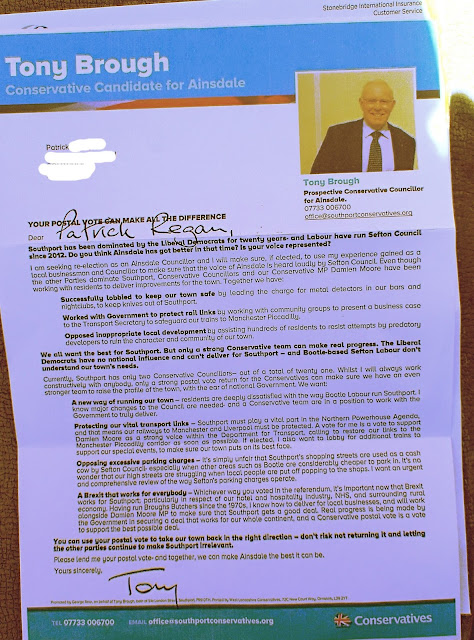 Are you aware that your colleague, Cllr Terry Jones, absurdly threatened my family with legal action some time ago?

Following my reply, Jones was given fair opportunity to respond yet oddly he chose to stay hidden and stay silent? Kindly examine the following news link…

Mr Brough, are you aware that for some inexplicable reason I am blocked by Southport Conservatives from seeing their Twitter? I presume that this was punishment for daring to stand up to Cllr Jones and other Tories who supported him?

You state in you letter – “Only a strong Conservative team can make real progress.”

You will hopefully forgive me for seeing your claim as ineffectual, due to your colleague’s outrageous and childish actions.

Your claims for a “strong Conservative team” are again proved somewhat futile when we look at previous significant Southport Tory failures.

Southport election 2016 – Tories hammered into the ground under questionable leadership

In my area, Ainsdale Conservatives went out of their way to block plans to aid residents. Did you fail to notice this? I only ask as you lived, I believe, very close to the Sandbrook Way area at the time of this amazing fiasco.

Damien Moore MP (a politician that you endorse) has been approached several times about the following childcare outrage and unfortunately failed to provide any reasonable response.

Additionally , Mr Moore has been accused of “heavy-handed censorship” after blocking constituents from his social media accounts and deleting their comments.

My teenage son who has autism tells me that he also wrote to Mr Moore and was simply ignored. While I appreciate that much of the above may have little to do with you, it is only the tip of the iceberg.

Are you aware of all the problems previously highlighted involving Southport Tories? There are many other issues that I could highlight as well, wherein the Conservatives have failed badly in this town.

I’m afraid that your ‘Vote for Me’ letter has not persuaded me that anything has changed regarding the ramshackle and frankly bizarre gathering that is quaintly known as the Southport Conservatives.

You state that Southport only has “two Conservative councillors.”

Due to the above concerns and numerous other grave reservations, I am very surprised that they have any councillors at all.

Another small example of Ainsdale Tory apathy was during the hard – won fight to save the Brookdale Resource Centre. Ainsdale Tories were never to be seen.

Politicians from both Labour and Liberal Democratic camps arrived to show strong support for the campaign. The fight back was initiated by locals/families who were profoundly concerned for the continuation of the centre, following despicable Sefton Council threats of closure.

However, Ainsdale Ward’s councillors, Terry Jones and Ted Hartill never came anywhere near the campaign or the facility. They showed zero interest!

NB. these OTS News article links remain online because they are true, easily substantiated, 100% accurate and not simply opinion.

My own conviction has always been to help any politician, regardless of party, who can truly help the people and local environment. Ainsdale Tories have failed miserably in recent years on this particular score.

Some of us who are aware of such things ask you sincerely – “Why would we ever vote for more of the same? “

Like the rest of Southport, Ainsdale needs more assistance. However, backing the wrong political horse will not help any of us in this capacity.

Nevertheless, thank you for giving me this opportunity to broach a few issues that ‘should’ sincerely concern you in your personal quest for political success.

ABOUT US
OTS News.co.uk (Onthespot) is an independent Southport news website. Updated daily from the heart of Southport with the latest local news, Southport FC news, Southport business and news in general.Editor James Cave
Contact us: ots@otsnews.co.uk
FOLLOW US
© On The Spot News © 2020